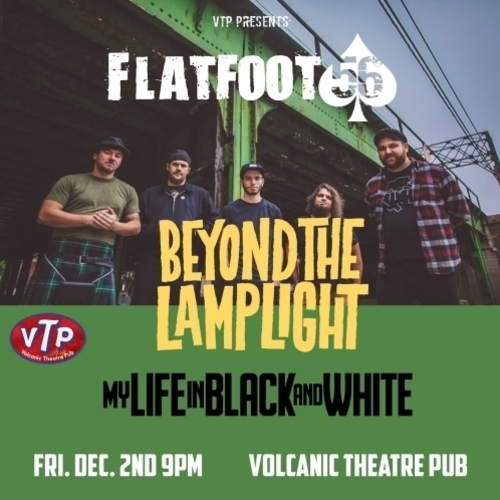 Playing a positive-natured brand of hardcore-tinged Celtic punk, Flatfoot 56 has been unleashing itself upon America and the rest of the world for over 16 years now. Forming in 2000, the Chicago natives achieved nationwide attention with their first two label-backed records, 2006’s Knuckles Up and 2007’s Jungle of the Midwest Sea. These releases built on a heavy dose of previously established regional notoriety, helping the band gain steam early on.

While each record received its fair share of acclaim, the quintet exploded onto a new level with 2010’s Black Thorn. Landing the band on a total of 9 Billboard Charts, Flatfoot 56 proved it could consistently reach an expanding audience while treading in a genre not often associated with widespread success. This success was advanced even further with song placements in the hit TV series "Sons of Anarchy" and the video game "Watchdogs".

Lead singers of Larry and His Flask, Ian Cook and Andrew Carew, continue the fun and songwriting alliance together in their new project Beyond The Lamplight. Soaring harmonies meld with deft lyricism and lightning-fast banjo-picking all against a double-time backbeat to form a quintessential electric barn burner.